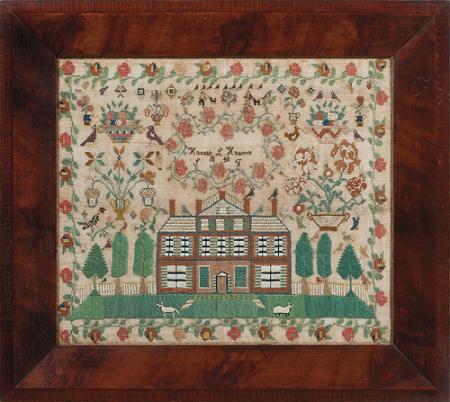 This important, visually captivating sampler was worked by Hannah L. Hancock, a schoolgirl from a prominent Burlington County, New Jersey family. Burlington County is an area extremely well regarded for the many excellent schools for girls and for the samplers made at those schools. Betty Ring devotes ten pages to the “Quaker Samplers of Burlington County” in Girlhood Embroidery, vol. II. With their Quaker roots solidly anchoring their skill with the needle and providing patterns for their samplers, these teachers and their pupils produced, as a group, an extraordinary body of work.

The best of these excellent Burlington County samplers includes a depiction of a large and highly detailed building, and Hannah Hancock’s representation would have to be considered one of the loveliest architectural renderings to appear on any of these samplers. The house is set on a rich green lawn animated by a pair of white sheep and flanked by trees and a crisp white fence. Additionally, Quaker motifs including the many pairs of birds, fruit-filled baskets and large and small pots of flowers are packed onto the sampler and many are tiny in scale. Two diminutive men, each with a dog, were worked under a lineup of nine tiny birds near the top and center of the sampler; other birds and butterflies appear upside-down. The inscription appears inside a fine rose and vine cartouche along with the initials “S.F.” which most likely are those of Hannah’s teacher. The border of polychrome flowers on a meandering vine offers a handsome visual framework.

Hannah Louisa Hancock was born on September 10, 1830, the daughter of Thomas and Prudence (Richardson) Hancock. Thomas, whose father Thomas (1757-1805) was also a native of Burlington County, inherited his father’s farm and turned his attention to nursery interests, becoming known throughout the United States for the cultivation of many varieties of trees, fruit and flowers, enjoying remarkable success in this area. History of Burlington and Mercer Counties, New Jersey with Biographical Sketches of Many of Their Pioneers and Prominent Men by Major E. M. Woodward and John F. Hageman (Everts & Peck, Philadelphia, 1883) includes detailed remarks describing the life of Thomas Hancock. He was active nationally as a founding member of horticultural and agricultural societies and served as a director of Mechanics’ National Bank in Burlington. When he died in 1854 an obituary published in a horticultural journal stated that “He was an energetic, zealous, public-spirited man, ever ready to co-operate in plans of agricultural and horticultural improvement. He possessed a friendly, kind-hearted and sociable disposition – was always free and candid in the expression of his opinions and honorable in his dealings.”

By 1852, Hannah married George R. Estelow, a shoemaker; they remained in the area and had four children. After the death of her husband in 1872, Hannah married Alfred Shinn, a carpenter, from Ocean County. Hannah died on August 17, 1907 and is buried in Burlington Methodist and Baptist Cemetery in Burlington.

This sampler was worked in silk on linen and is in excellent condition. It has been conservation mounted into a fine period paint-decorated beveled frame.