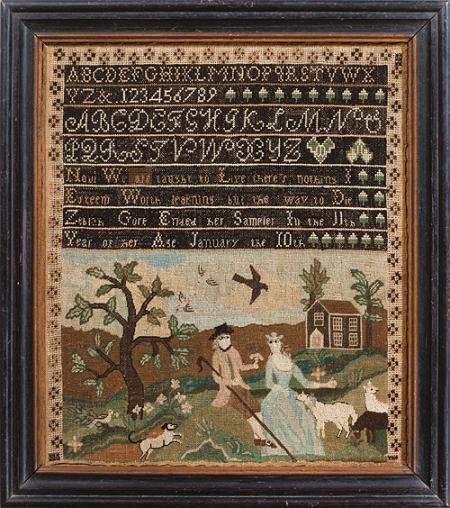 We are privileged to have offered this very important icon of American schoolgirl samplermaking, the fully worked pictorial sampler made by Zebiah Gore of Boston. This extraordinary piece has been revered for almost a century as it was illustrated in the seminal 1921 book, American Samplers by Ethel Bolton and Eva Coe (The Massachusetts Society of the Colonial Dames). Long referenced as a transitional composition that links the early Boston canvaswork “Fishing Lady” group to pictorial Boston samplers, the sampler features a scene of a couple, specifically a shepherd presenting a flower to a lady, in a pastoral setting with animals frolicking and birds soaring above. The handsome upper register presents alphabets and a verse in a solidly stitched format, the deep brown background providing a wonderfully graphic statement. The sampler is bordered with a fine geometric framework on three sides. The composition is extremely pleasing and Zebiah’s execution is impeccable.

The stitched inscription reads, “Zebiah Gore Ended her Sampler In the 11th Year of her Age January the 10th.” She was the daughter of Jeremiah Gore Sr. (1734-1813) and his third wife, Hannah (Richards) Gore (1745-1831). Quite notably, a virtually identical sampler was worked by Elizabeth Richards, at age 9, also finished on January 10, 1790. This is in the collection of Historic Odessa Foundation in Odessa, Delaware; it was previously exhibited at Winterthur Museum as part of their collection, and was published as plate 6 in Plain & Fancy: American Women and Their Needlework, 1700-1850 by Susan Burrows Swan (Holt, Rhinehart and Winston, 1977). Zebiah Gore and Elizabeth Richards were distant cousins and clearly attended the same school in the Boston area, at precisely the same time.

The Gore and Richards samplers are remarkably similar as evidenced in the image below. They share the identical lady and gentleman, the house in the background, large tree and soaring birds. Both samplermakers depicted the same animals and both girls used the bullion stich to create their sheep. Both samplers are stitched with the following inscription: Now We are taught to Live there's nothing I / Esteem Worth learning but the way to Die.

The Gore family in Massachusetts began with two brothers, Richard and John, who emigrated as adolescents and settled in Roxbury. John Gore (1634-1705) was Zebiah’s ancestor and we know a great deal about the Gore family from Historic Homes and Places and Genealogical and Personal Memoirs Relating to the Families of Middlesex County, Massachusetts by William Richard Cutter (Lewis Historical Publishing Company, New York, 1908). John Gore attended Harvard College from 1651 to 1654 and was a master mariner who later became a surveyor and civil engineer and a member of the Roxbury military company that assisted in the overthrow of the royal governor. In 1683, at age 50, he married Sarah Gardner and they resided in Roxbury where he was a town clerk and selectman. They lived on the property that became Boston Latin School.

One of their great-grandsons was Jeremiah, Zebiah’s father. Jeremiah was a landowner in Boston, as well as a member of the Roxbury fire company. He married Hannah Richards of Stoughton, Massachusetts on February 18, 1773, and Zebiah was born on July 27, 1780, baptized at Hollis Street Church in Boston on July 31, 1780. On January 24, 1802, Zebiah Gore married Edward Johnson (1769-1853), also at Hollis Street Church. They had two children: Zebiah (Johnson) Balch (1807-1892) and Hannah Richards (Johnson) Leeds (1817-1907). After the death of Zebiah on August 1, 1848 and that of her husband in 1853, this sampler became the property of their daughter, Hannah and then descended to her daughter, Mary Hannah Leeds (1854-1939), who owned the sampler when it was illustrated as plate XXXVIII in American Samplers. It was exhibited at the Museum of American Folk Art, as part of an exhibition The Polite Lady: A Course of Female Education, 1994 to 1995.

The sampler was worked in silk on linen with the notable addition of hair couched down for the two people’s actual hair. This same technique was used by Elizabeth Richards on her sampler. Zebiah’s sampler remains in its original painted frame and has its original backboard which is inscribed in pencil Zabiah [sic] Gore born July 27 1780. It is in excellent condition and has been conservation mounted.