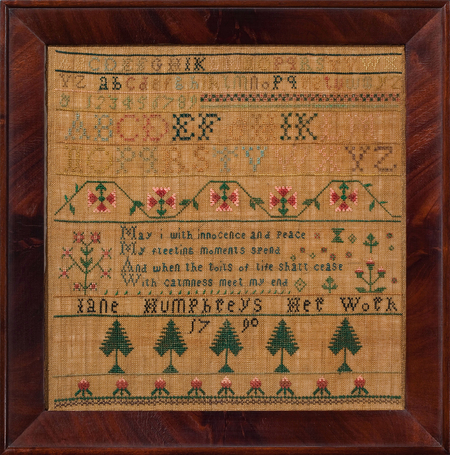 The 18th century samplers made by Quakers in Philadelphia and surrounding areas can feature strong regional characteristics and excellent needlework; we’re pleased to offer this praiseworthy sampler made by Jane Humphreys in 1790. The row of pine trees and the finely worked bands with a great number of outstanding queen’s stitched flowers and strawberries on Jane’s sampler are indicators of both the regional traits and the high standards set by instructresses of the area.

The Humphreys family was prominent in Philadelphia and Chester County, and some samplers made within this family have been published and well-documented by scholars in the field for a century at this point: American Samplers by Bolton and Coe, 1921, illustrates a highly significant white-work 1771 sampler worked by a young lady named Jane Humphreys, plate XXXVI. She was born in 1759, the daughter of Joshua and Sarah (Williams) Humphreys. Along with another family sampler, made by Jane’s niece, Ann, in 1796, this was donated to the Philadelphia Museum of Art in 1914. Jane’s white-work sampler, considered one of the treasures of the museum’s textile collection, is illustrated as plate 153 in The Fine Art of Textiles Philadelphia Museum of Art, by Dilys Blum.

The sampler that we offer now was most assuredly worked within the same family and was very likely made by precisely the same talented Jane Humphreys, who remained unmarried and died in 1838. It is sometimes difficult to know the identity of a samplermaker with absolute certainty, but this strong attribution is more than appropriate. The uncommon verse that Jane worked on this, her 1790 sampler, was also documented in the Bolton and Coe book, where it is stated that it was written by Hannah Hollingsworth. As a further enticing clue, the donor of the Humphreys samplers at the Philadelphia Museum was from the Hollingsworth and Humphreys families.

Worked in silk on linen, the sampler remains in excellent condition and has been conservation mounted into a mahogany beveled frame with an outer bead.