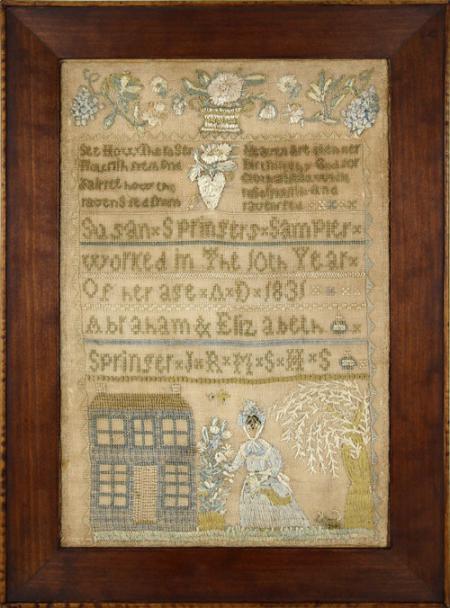 Born on January 18, 1822, Anna Susan Sprenger / Springer was the daughter of Johann / John Abraham Sprenger / Springer (1770-1854) and his second wife, Elizabeth Lauer (1800-1875). Abraham and Elizabeth were both born in Bavaria, Germany and emigrated in 1821, departing from Amsterdam on the ship, Governor Hawkins, and landing in Philadelphia on December 3, 1821, as documented by the Pennsylvania Passenger and Crew Lists, from The National Archives. They were accompanied by Abraham’s son and daughter from his first wife, Maria Barbara Kunz, who died in 1820.

Biographical Annals of Lancaster County Pennsylvania (J H Beers & Co, 1903) publishes much about this family, stating that Mr. Springer was a butcher and then a brewer in various towns in southeastern Pennsylvania. Susan, as she called herself on her sampler and in other records, was the first child of twelve born of Abraham and Elizabeth.

Census and other records show the family living in Reading and then in Maytown, a small village in East Donegal Township, Lancaster County, northwest of Marietta, by 1830. In 1832 St. John’s Lutheran Church of Maytown recorded Abraham Springer as a member. By 1840 the family resided in Lancaster and an 1843 Lancaster City directory includes Mr. Springer, a brewer on East Orange Street.

Anna Susan Springer married Henry Weber, a candy manufacturer, and they lived in Pottsville, Schuylkill County; the 1869 city directory includes Henry Weber, confectioner. She died on May 21, 1875 and is buried in the Presbyterian Cemetery.

Susan made this fine, little sampler when she was 9 years old in 1831, and stitched the names of her parents and what are likely the first initials of six of her siblings (note that Pennsylvania German given names are two part and these are often used interchangeably). It belongs to a small group made in Maytown in the early 1830s. For a related example refer to Mary Jaene Edmond’s Samplers and Samplermakers: An American Schoolgirl Art 1700-1850, figure 50 on page 110, which features a sampler worked by Catharine Stape in 1830. The makers of these Maytown samplers included very tall, fashionably dressed ladies with their little dogs, brick houses, willow trees and low baskets of lustrous flowers. Our example contains the same verse and exact phrasing of the legend as appears on others of this group. The verse reads as follows, “See how the roses / Flourish fresh and / Fair see how the / Ravens fed from / Heavens are then ner/ Distrust thy God for / Cloth or bread while / Roses flourish and / Ravens fed.”

There is a wonderful, highly detailed watercolor drawing by Jacob Maentel, likely created in the late 1820s, entitled Portrait of Johann Abraham Sprenger and Family, and is in the collection of Winterthur Museum, Garden & Library. Two young girls sit in small rocking chairs in the foreground and they have been identified as Anna Susan and her younger sister, Eliza.

The sampler was worked in silk on linen and is in excellent condition, retaining much of its original color as evidenced by a photo taken of the reverse prior to mounting, see attached. It has been conservation mounted and is in a newly made cherry beveled frame.