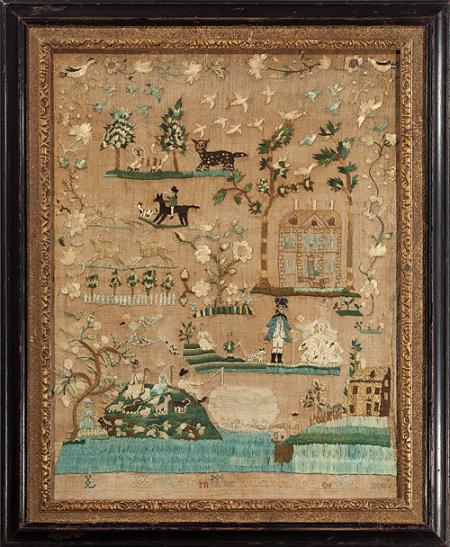 Jane Loxley was born February 16, 1765 in Philadelphia, the daughter of Benjamin Loxely II (1720-1801) a master carpenter and builder, who was one of the four men in charge of securing and building Carpenters Hall, one of the most important colonial buildings in Philadelphia. He also owned a spice and tea shop jointly with Benjamin Franklin. Loxley was a patriot and a prominent advocate for independence and fought with Gen. Washington with whom he maintained a long friendship. It is widely thought that the key that Benjamin Franklin used for his kite and key experiment was the key to the front door of the Loxley house.

In 1761, Benjamin Loxley married Catherina Cox, as his second wife, who was the daughter of John and Mary Cox of Upper Freehold, New Jersey. The Cox family was amongst the first settlers of New Jersey, purchasing land from the Native Americans in 1665. Benjamin and Catherina gave birth to twelve children, only five of whom lived to adulthood. A photocopy of the records kept in a 1792 family bible is included in the extensive file of genealogical information, which adds greatly to this fascinating sampler.

Jane was the third child born to the Loxleys and in 1776, when she was eleven years old, worked this extraordinary sampler. They lived at 2nd and Spruce Streets and then in Loxley Court, between 3rd and 4th Streets off Arch Street, a courtyard of many townhouses that still exists today.

On September 13, 1798, Jane married Samuel Clarke of Philadelphia and they had at least two children, Israeland Marian. Jane died onFebruary 1, 1847, a widow, at age 82. A photocopy of her 1837 will indicates that she bequeathed nine houses and properties to her daughter Marian and to various siblings, nieces and nephews.

Jane’s sampler is an outstanding and important piece worked in the most significant year of Philadelphia’s history. The composition is extraordinary with its highly developed scenes of houses, gentlefolk fishing and hunting and detailed depictions of people, birds and animals. Interestingly, the scene in the upper left of the lion and leopard under trees, each animal looking directly at the viewer, references a group of highly significant Philadelphia silk embroideries that dates from the 1740s and 50s. This group is well chronicled in an article published in The Magazine Antiques, September 2006, “Discoveries in Philadelphia Needlework: The Tree of Life Embroideries” by Virginia Jarvis Whelan (see figure 11 and others). The comparison is very interesting.

This sampler is signed, “Jane Loxley Her Work in The Twelveth Year of Her age novr 21 1776,” just beneath the lawn. We are privileged to be able to offer this sampler, which succeeds on many levels. It descended in the family until recently.

Measuring 18½ inches x 14½ inches (sight size), this was worked in silk and hair on linen. The condition is very good with some slight weakness to the linen. It has been conservation mounted into a fine period frame with conservation glass and the framed size is 22½ inches x 18½ inches.