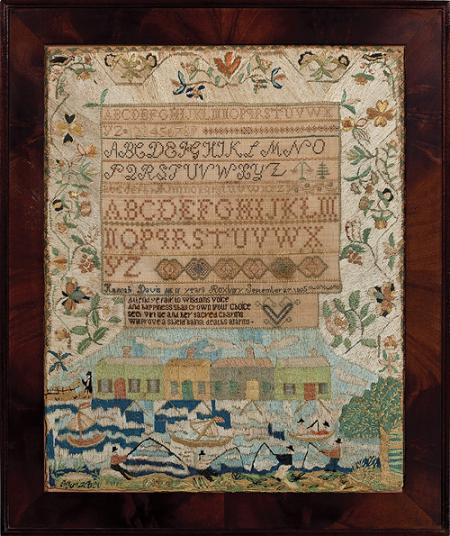 This outstanding sampler features a stunning and highly unusual pictorial scene and an excellent three-sided border, all rendered in the long, crinkled silk stitches that represent the finest needlework accomplished in the Boston area. Four polychrome cottages, under a sky with lingering clouds, sit on a lake filled with sailboats and rowboats on choppy blue and white water. Several men are fishing while one tends to his horse on land. The composition, the color-blocking and the use of straight and angled lines lend a somewhat abstract quality to the scene. And while needleworkers in Boston and the area included depictions of ladies and gentlemen engaged in the sport of fishing throughout the 18th century, these fishermen are dressed and postured as more casual folk, consistent with the simplicity of the architecture as well. Details such as the window mullions, the fishermen’s top hats, the pennants flying from the boat masts, the foliage in the forefront and the specific and detailed flowers and grape bunches in the border contribute to the appeal of this sampler.

The samplermaker, eleven-year-old Hannah Davis, was born December 15, 1792 to Moses Davis (1744-1823) and his wife, Hannah Pierpont Davis. The family lived in Roxbury, which was then a prosperous, small town adjacent to and southwest of Boston. Davis Families of Early Roxbury and Boston by Samuel Forbes Rockwell (The Andover Press, 1932) documents the family history, which began with William Davis who came to New England in 1635 and settled in Roxbury by 1640. Hannah’s father, Moses, was a Minuteman at the Lexington Alarm in 1775. His father, Aaron Davis, served as a delegate three times to the Provincial Congress and was a colonel in the Massachusetts Militia.

In 1814, Hannah married David Dudley (1787-1841), a prominent banker in Boston and descendant of Thomas Dudley (1576-1653), governor of the Massachusetts Bay Colony and signer of the charter establishing Harvard College in 1650. A fine pair of portraits of the handsome couple, David and Hannah Dudley, was painted by Chester Harding, circa 1836, and they are in the Harvard University Portrait Collection, the result of a 1988 family bequest. American Paintings at Harvard, Volume One, by Theodore E. Stebbins and Melissa Renn (Yale University Press, 2014) published these portraits as figures 195 and 196. Hannah and David Dudley had ten children and they remained in Roxbury. Hannah, a widow at age 49, later resided in Boston with a daughter and died in 1886.

The sampler was worked in silk on linen and is in excellent condition. It has been conservation mounted and is in a mahogany frame.