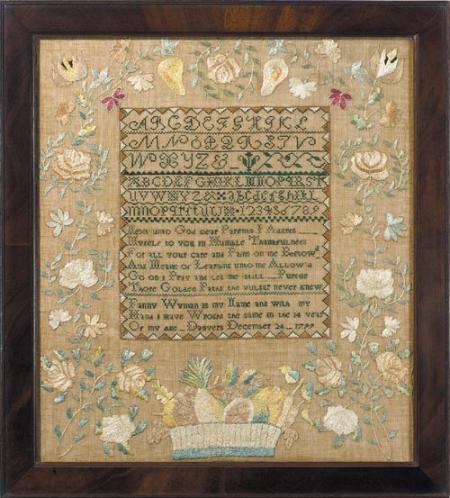 An important group of samplers was worked in the neighboring towns of Danvers and Salem, Massachusetts in the late 18th and early 19th centuries.  Fanny Wyman’s large and splendid sampler, worked in 1799 in Danvers, is a new discovery belonging to this body of work.  The composition of Fanny’s sampler, with its wide borders of open-blossomed flowers on leafy vines and a low basket filled with fruit, is almost identical to that of a sampler that was also made in Danvers and that is in the collection of Winterthur Museum.  This sampler, by Beulah Puritan, is dated 1812,  and it is interesting to note that these two samplers so closely resemble one another yet were made 13 years apart.  The Danvers style was an enduring one and there may have been one teacher responsible for imparting this high level of needlework and the specific design to students in this town over many years.

The Wyman family traces its roots directly back to its immigrant ancestor, Francis Wyman, who was born in England in 1618 and had settled in the Massachusetts town of Woburn by 1640.  Along with his younger brother, Francis became a highly successful tanner and bought much land in the area. The Francis Wyman House restored and on its original 1666 foundations is a national landmark and one of the three oldest houses in Massachusetts.  Fanny Wyman was born on January 29, 1786 to Francis and Lucy Wyman who were married in Woburn in 1785. The family removed to Danvers as verified by Danvers’ vital records.

Fanny Wyman’s sampler is quite large and beautifully worked.  The verse reads as follows and is one of the most appealing to appear on schoolgirl samplers:

"Next unto God dear parents I address / Myself to you in humble thankfulness /  For all your cares and pains on me bestowed / And  means of learning unto me allowed /  Go on I pray and let me still pursue / The golden paths the vulgar never knew".

Worked in silk on linen, the sampler is in excellent condition, conservation mounted into a mahogany frame.