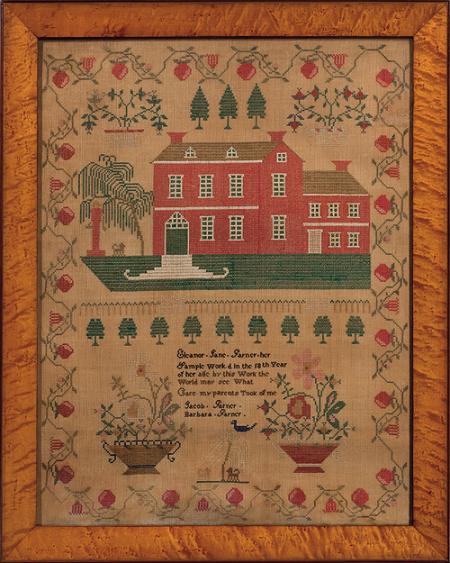 A large and wonderfully pictorial sampler, this is signed, “Eleanor Jane Garner her Sample work’d in the 18th Year of her age by this Work the World may see What Care my parents Took of me Jacob Garner Barbara Garner.” The Garner family lived on a farm near Crabb’s Mill on Big Pipe Creek in Frederick County (now Carroll County), Maryland, east of Hagerstown by about 35 miles. This sampler has a closely related counterpart in the important sampler made by Sarah Elizabeth Haines in 1848 in the collection of the Maryland Historical Society. Eleanor and Sarah would have studied under the same schoolmistress and both featured large brick houses with sweeping white steps that curl up on wide green lawns, with willow trees and water pumps. Small pine trees, large flower baskets, little dogs and birds further decorate these samplers.

Eleanor’s ancestors in America began with Georg Korner / Gerner / Garner (1727-1799) who was born in Pfalz, Germany and emigrated to Pennsylvania in 1750, later settling in Maryland. As stated on her sampler, Eleanor’s parents were Jacob and Barbara Garner. Jacob Garner was born in 1802, the son of a cabinetmaker and farmer who lived in Linwood, Maryland. He married Barbara Six and they had four children, including Eleanor. In 1853 the family removed to Darke County, Ohio, traveling approximately 450 miles by covered wagon. Eleanor married William Routzong (1821-1885) and they lived in Van Buren, Darke County, Ohio where they had three sons between 1859-1866.

The sampler was worked in silk on linen and is in excellent condition with one very minor area in the upper right at the side border with has been restored and stabilized. It has been conservation mounted and is in a beveled figured maple frame with a black outer bead.