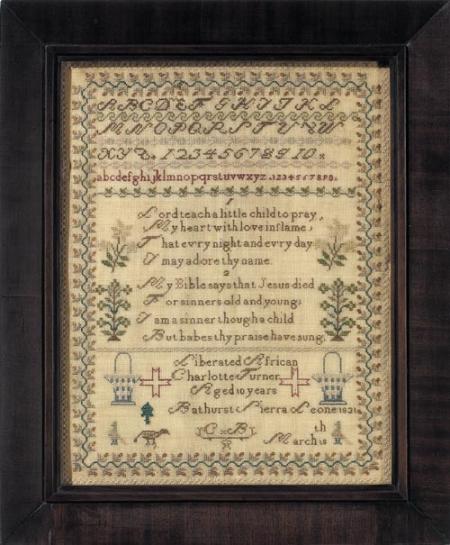 Throughout the first forty years of the 19th century, schoolgirls in English speaking countries, notably the United States and the British Isles, made needlework samplers.  As missionary movements, both American and English, intensified their activities in outposts such as India and Africa, the tradition of samplermaking traveled with them, providing an opportunity to teach the English language and instill religious beliefs.  One such missionary posting was in the west African country of Sierra Leone where a massive resettling of "Liberated Africans"  - now known as "Recaptives" - took place from the very late 18th century through the mid 19th century. This sampler, worked by a ten-year-old named Charlotte Turner, was made within this population, and documents samplermaking by formerly enslaved young African girls.

The settlement of Bathurst included a school administered by the Church Missionary Society of England which was responsible for the education of thousands of children over the years. The 1830 Missionary Register of the Society indicates that the missionaries were concerned about the welfare and involved in the education of these children, “The Girls, under well-qualified Female Teachers, are instructed in Reading, Writing, Arithmetic, the Elements of English Grammar and Geography, plain sewing, knitting, marking and etc. . . . We are convinced that the instruction and right education of the Children of the African Race will do more to advance the cause of Universal Emancipation, than all other means put together. Whatever is achieved in this way, strikes at the root of the evils against which we are contending: it counteracts, and in measure abolishes, that prejudice against the Colour, which is the greatest barrier to Emancipation.”

This sampler is a rare piece of material culture which stimulates contemplation of this aspect of history, as well as the significance of needlework to the accepted conception of proper education and the spread of this value to other cultures.

Now in the collection of the Seattle Art Museum.