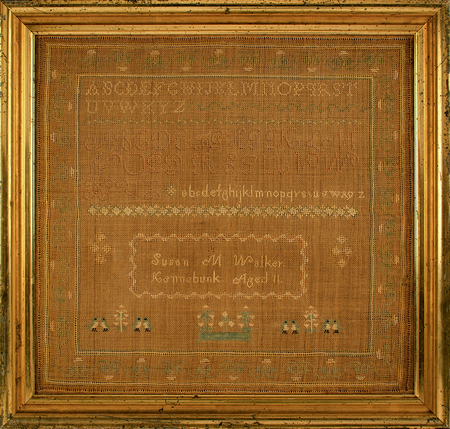 Kennebunk is one of Maine’s most historic and charming small towns. Samplermaker, Susan M. Walker, was born there in 1794, the daughter of Andrew and Susannah (Merrill) Walker. Early family and area histories publish much about the Merrill family, specifically John Merrill, Susan’s maternal grandfather. He was the principal surveyor in the area, a “public-spirited and patriotic man,” holding many civic positions. “Mr. Merrill was a man of judgment and moral worth; he was an ardent lover of books and collected a large library at a time when books were both costly and difficult to obtain. It is said that he bought the first Cyclopedia owned in the District of Maine.”

“He was an indulgent father, and it is related that on one occasion, when his daughter Susannah was only seventeen years of age, he yielded to her solicitations and allowed her to make a visit to Boston. She accomplished the journey, riding the whole way on horseback, under the escort of different male carriers on the route. The site of a beautiful and graceful, as well as daring young damsel, galloping along with her red cloak fluttering behind her, created a sensation in all the settlements and towns through which she passed, and one ardent swain was so smitten by her attractions at the time that he did not rest until he made her acquaintance. He at once proposed and was accepted and the next spring they were married.”

The family lived in and nearby Arundel, 4 miles from Kennebunk. Susan married Ralph Curtis (1785-1855) and they had at least seven children. Susan died in 1877 and is buried in the Unitarian Churchyard Cemetery in Kennebunk.

The sampler was worked in a subtle palette on tan linen, as a photo of the reverse taken prior to mounting indicates. The little pairs of birds and small stylized plants provide delightful embellishment to Susan’s alphabets and inscription. The border is further enhanced by a fine drawn-work edging.

Worked in silk on linen, the sampler is in excellent condition. It has been conservation mounted and is in a fine early 19th century gold leaf frame. 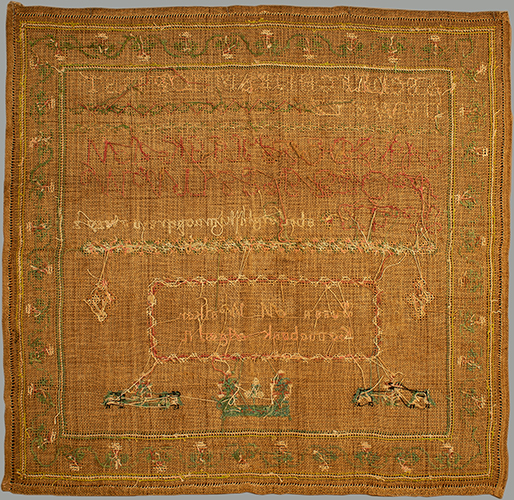