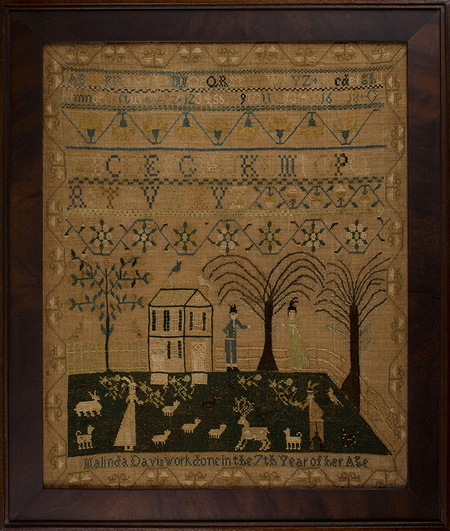 A small, important group of samplers was made by schoolgirls in Philadelphia in the first decades of the 19th century. The defining characteristic of these are the ladies and gentlemen wearing plumed hats, wonderfully portrayed by Malinda Davis on this splendid sampler. Along with houses, they are set on wonderful sweeping lawns filled with many animals, flowers and willow trees, providing excellent  embellishments on these samplers. They must have been made under the instruction of a local schoolteacher and surface only rarely.  Malinda’s sampler is a delightful new discovery and a significant addition to this praiseworthy group. Quite remarkably, Malinda was just  7 years old when she made this..

Malinda’s family history is a story worth telling. She was the daughter of Abner and Hannah (Haller) Davis of Chester County and Philadelphia. Abner attended the University of Pennsylvania, and is listed as a known cabinetmaker later in his life. Malinda was born in July of 1799. By 1817, Abner was a widower and had remarried, then living in Georgia at Hazelhurst House, just outside of Atlanta. Malinda seems to have remained in Philadelphia and, in 1831, married Charles Henry McCord (1808-1887). Charles was the son of David and Sarah (Griscom Donaldson) McCord - and a grandnephew of Elizabeth Griscom, aka Betsy Ross. Much has been written about the family, of course. Their Griscom ancestor was Andrew Griscom who came to Philadelphia in 1682, and lived next-door to William Penn in the first brick house built in Pennsylvania, according to published accounts.

Malinda and Charles had two daughters, Adela and Eveline; they ultimately removed to the South as well, and Malinda died in 1865, Charles in 1887. They are buried in Richland County, South Carolina. The sampler descended in the family until recently. A fascinating file of family research accompanies the sampler.

The sampler was worked in silk on linen and is in very good condition. There is one area in the first row of the alphabet that has been secured as there was loss to the stitching. It has been conservation mounted and is a fine, mahogany frame.