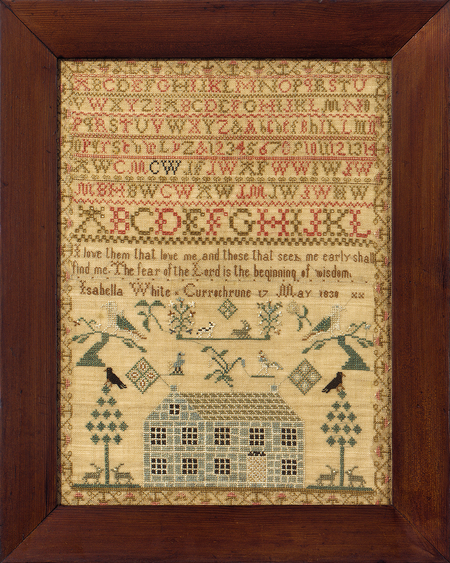 Scottish samplers frequently share many appealing characteristics, and this handsome sampler includes many of these traits: the blue stone house with a slate roof, stylized diamond trees, pairs of deer, lettering alternating in a red and green palette and the listing of many family initials. The samplermaker was Isabella White who was born circa 1820 to Adam White and Catharine Maxton; their initials are at the start of the row of family initials. The 1841 census includes this family living at a house named Currachrone - which Isabella stitched following her name. This was in Crieff, a town west of Perth. The initials of her siblings, including James, Ann, John and William, are also on the sampler. In November 1850, Isabella married James Smith and they had at least three children.

Other attributes of the sampler include the large eyelet stitched uppercase line alphabet and the little scene of a spotted dog and deer as well as the large black birds perched on the trees. The needlework is very fine throughout, and the composition is excellent.

The sampler was worked in silk on linen and is in excellent condition. It has been conservation mounted and remains in its original beveled frame.