We are very pleased to offer this great rarity - an extremely early sampler made by a sixteen-year-old Quaker girl in Chester County, Pennsylvania, just west of Philadelphia. Signed, “Hannah Townsend made this sampler in 1734,” she also stitched the names of her parents, Joseph Townsend and Martha Townsend, as well as family initials - WT, MT, IT, IT MT and RT. The Townsend family history mirrors that of many of the early settlers of Pennsylvania. Joseph (1684-1766) was born in Berkshire, England, the grandson of one of England’s early Friends, Richard Townsend (1602-1697), who was repeatedly imprisoned for his religious beliefs. The family remained steadfast in their Quaker faith and two generations later, in 1712, Joseph, his wife, Marth Wooderson, and their one-year-old son emigrated to Pennsylvania, settling initially in Philadelphia.

Joseph was a weaver and farmer, and he and Martha had several children: William, Mary, Joseph, John, Hannah (our samplermaker), Martha, Richard, and Esther. The initials of many appear on this sampler. Hannah was born on August 9, 1718. In 1741, she married Nathan Sharpless (1715-1755), and, after his death, Charles Ryant. She died in 1790.

A notable family member was Hannah’s nephew, Joseph Townsend, whose published observations (Some Account of the British army, under the command of Gen. Howe, and of the battle of Brandywine, September 11, 1777, and of the adventures of that day, which came to the knowledge and observation of Joseph Townsend Proceedings of the Historical Society of Pennsylvania No. 7 June 23, 1846) of the Gen. Howe’s attack on Gen. Washington’s right flank on September 11, 1777 and subsequent battles of the Revolutionary War became highly regarded accounts, providing significant historical information.

Ye bles’t are they / make it their stay / And prize it more than gold.”

A numerical progression was worked in the box at right and a fine border surrounds the composition on four sides.

A photo taken of the reverse of the sampler prior to mounting indicates that the sampler retains much of its original color. Worked in silk on linen, it has been conservation mounted and is in an 18th century frame. 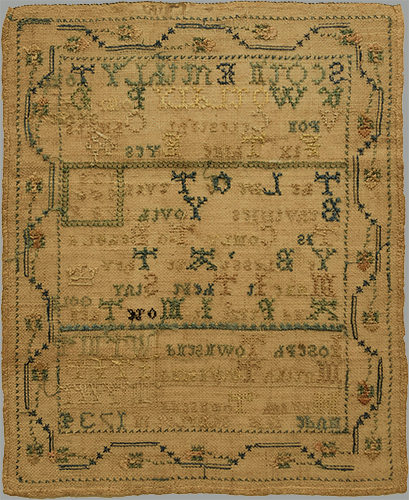