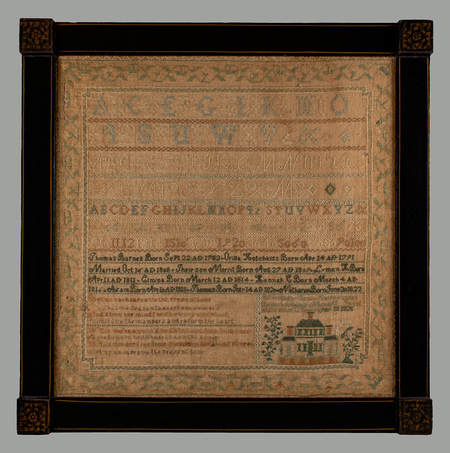 This large, very fine sampler includes a family register along with many alphabets and a small pictorial scene of a house and flowering plants; it is signed, “Wrought by Elmina Barnes under the instruction of Miss M. Street at the age of 11 years July 18, 1825.”  Elmina listed much family information, documenting her birth along with those of her parents and siblings, and the marriage of her parents. She was the daughter of Thomas and Orilla (Hotchkiss) Barnes, born March 12, 1814 and in 1833, she married Elijah Bradley. The Barnes family in America began with Thomas Barnes who settled in Connecticut and signed the Colony Constitution in 1644.

There are two other samplers known to have been made at the same school. Elizabeth L. Smith's sampler made the same year, 1825, is in The Metropolitan Museum and another, by Esther Tyler dated 1828, is in the collection of the Connecticut Historical Society. These three samplers are large and share similar composition and workmanship, each with the same notched corner inner border and related houses. They include family register information worked in very small-scale lettering.

The samplermakers were taught by Miss Maria M. Street, and much is known about her as well. Maria Melcher Street was born on January 17, 1807, to Justin Washington Street and Anne (Whidden) Street in New Haven. In 1827, she married Lucius Hotchkiss, a distant relative of Elmina, and they had three children. Sadly, Maria died when she was just 26 years old in 1833. The Street Genealogy, by Henry A. Street (Exeter, NH, 1895) tracks this family as far back as the late 16th century.

Worked in silk on linen, the sampler is in excellent condition, with some very tiny areas of loss or weakness to the linen. It has been conservation mounted and is in its outstanding original painted and stenciled corner-block frame.