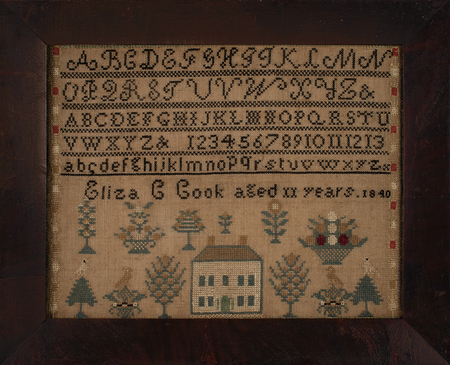 A charming sampler with a house and many motifs in the lower register and alphabets and a numerical progression filling the upper half, this was made by Eliza C. Cook, age 11 in 1840. Eliza was the daughter of Franklin and Mary (Wilder) Cook, born in Newfane, Vermont on August 4, 1828. Her middle name was likely Chamberlain, the surname of her maternal grandmother.

Eliza’s father died a year after she was born, and her mother remarried to William Lovering in 1834. By 1840 the family was living in Gill, Massachusetts, a town about 30 miles from Newfane. In 1855, Eliza married Rev. Robert Dexter Miller (1824-1909), as his second wife. Published information about Rev. Miller describes his notable education at Amherst College, and distinguished career. They had six children. Eliza died in 1908 in Malden, Massachusetts.

The sampler was worked in silk on linen and is in excellent condition. It has been conservation mounted and is in its original, beveled mahogany frame.