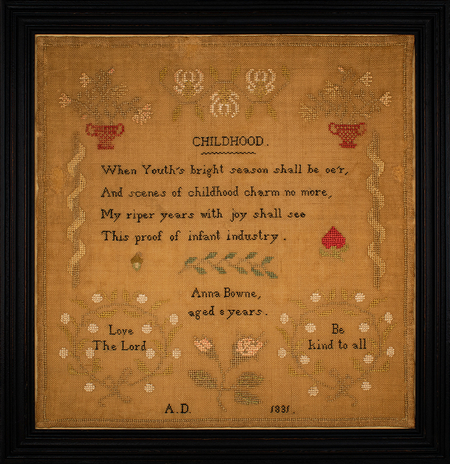 Samplers made at the Quaker schools of New York City share overall characteristics of composition and stitching, and this carefully worked sampler by Anna Bowne is a fine example. These samplers have their roots in the Female Association Schools which were first established by members of Friends Meetings in New York City in 1801 and remained in operation until 1845; the schools were in New York and Flushing. Characteristics include a central verse, often with a title, and a balanced composition with small motifs that are also found on Quaker samplers made in Pennsylvania and New Jersey. Anna included the vertical band that resembles a rod that has been wrapped with ribbon, a motif that is unique to the New York samplers. The lettering on all of these samplers is worked in black and the font is exclusively a crisp, Roman block font, again, a Quaker characteristic. Anna included two aphorisms: “Love The Lord,” and “Be kind to all,” each worked within wreaths of buds on vines.

The Bowne family in America began with Thomas Bowne (1595-1677) who emigrated from England to Boston, Massachusetts, arriving with his wife, Mary, and their son and daughter, circa 1649. Within a few years they removed to Flushing, Long Island, New York, establishing a settlement of Friends there. His son, John Bowne (1627-1695), built what is now known as the Bowne House (https://www.bownehouse.org/), circa 1661, a New York Landmarks Conservancy Sacred Site. Quoting from this site, “Over the course of 300 years, the family left its mark on American culture, participating in events of both regional and national significance -starting with John Bowne’s courageous defense of religious freedom in 1662, an act which inspired the principles later codified in the Bill of Rights - and continuing with subsequent generations’ abolitionist activities and participation in the Underground Railroad.”

Several generations later, in 1822, Anna was born to John and Eliza (Howland) Bowne, members of the New York Monthly Meeting. Anna was the seventh of their nine children. Quaker records and Bowne Family of Flushing, Long Island, (New York, 1948) provide much information about the family. Anna remained single and lived with her sisters, Mary, Elizabeth and Sarah, in New York City. She died in 1897.

Notably, several women from the Bowne family were involved in the founding and administration of the Female Association Schools.

The sampler is worked in silk on linen. The needlework is in excellent condition; there are three small areas of the linen near the edges of the sampler that have been secured and darned. It has been conservation mounted and is in a molded and black painted frame, with UV filter glass.