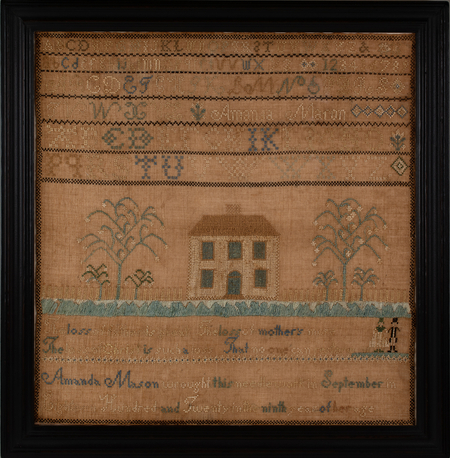 Signed, “Amanda Mason wrought this needlework in September in Eighteen Hundred and Twenty in the ninth year of her age,” and we have to wonder if Amanda’s instructress wanted the year spelled out as such to add to her students’ needlework assignment; we see this so rarely.

The sampler nicely features a fine house with deep blue window and door set between trees with a picket fence on a lawn of shaded blues. The verse is a classic sampler one which reads, “The loss of father is great, the loss of mother’s more, The loss of Christ is such a loss That no one can restore.” A charming little couple holding hands appears at the end of this. Alphabets fill the upper portion, with her name repeated in this area as well.

Amanda was born December 22, 1811 to William and Lydia (Brown) Mason. Much has been published about the family, which began with Sampson Mason (1625-1676), a shoemaker, who was born in England and emigrated to Massachusetts, circa 1650. He married Mary Butterworth and they had 13 children.  Sampson became a prominent citizen and landowner in Swansea, where he is recognized as one of the founders of the town. Amanda was his fourth great-granddaughter. Photocopies from Genealogy of the Sampson Mason Family, compiled by Alverdo Hayward Mason (East Braintree, Massachusetts, 1902) are included in the extensive file that accompanies the sampler. 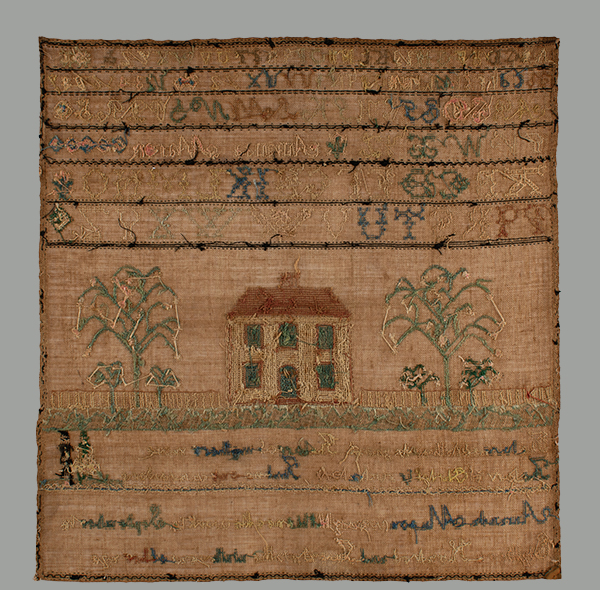