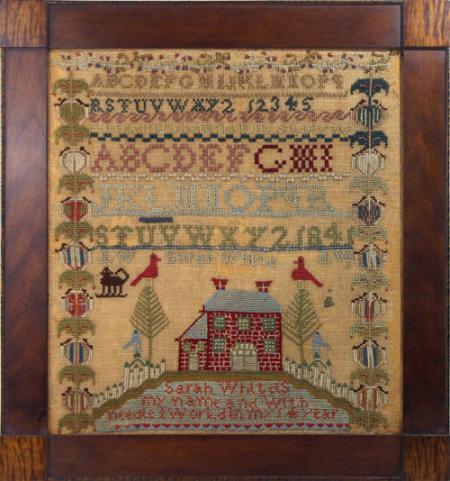 In the 1840s and 50s samplermakers turned to using richly colored merino wool and their samplers can offer a visual strength that is very appealing. Such is the case with Sarah White’s sampler made in 1841, which features a splendid brick red house with a blue roof and two chimneys along with a lean-to dependency building with the same features. Details include careful delineation of the bricks, fan window over the double doors and mullioned windows. White picket fences line the grassy hill with leggy bluebirds perched on the arched gates.

Contained within the lawn is an inventive platform for Sarah’s inscription, which is worked in deep rose on blue and grounded with a sawtooth edging of the same. It reads, “Sarah White is my name and with needle I work.d in my 14 year.” Above the house Sarah signed her work again and included the initials of her parents, JW and JW. The date, 1841, is stitched at the end of the alphabet on the line above. The side borders are also highly creative, with fat striped blossoms and hearty leaves rising vertically.

Born on January 28, 1828, Sarah was the daughter of James and Jane White of Hebron, New York, a small town near the Vermont border, southeast of Lake George, in Washington County. James White was born in County Cavan, Ireland in 1794 and, with his parents and siblings, emigrated to New York in 1805. He married Jane Hall, who came from a family of Irish immigrants as well. James and Jane lived in Hebron and raised twelve children, Sarah was their fifth. Information published about the history of the White family, focusing on Sarah’s brother, Henry White, in History of Henry County Illinois (Chicago, 1910), tells us that James White “served his country as a soldier in the war of 1812 and was always a loyal and public-spirited citizen.”

Sarah remained single and lived with her family; the 1860 census records them in Salem, a town about 8 miles from Hebron. Interestingly, Sarah is listed as a tailoress - putting her sewing skills to good use indeed. She died in 1894 and is buried in Hebron.

The sampler was worked in wool on linen. The condition of the needlework is excellent while the linen has had some areas of darning. It has been conservation mounted and fully stabilized and is now in a cherry and maple corner-block frame.