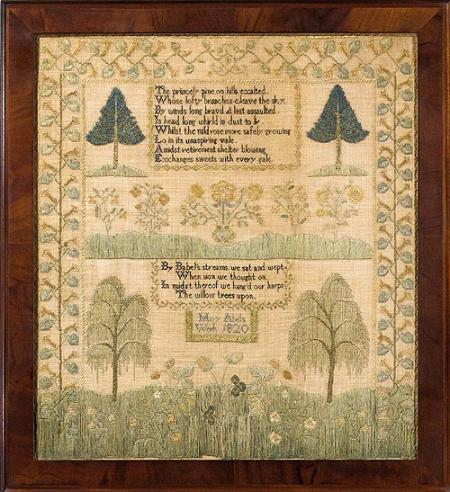 A small group of highly sophisticated and very beautiful samplers was made in Montgomery County , northwest of Philadelphia between 1817 and 1829. This newly discovered sampler, made by Mary Abel in 1820, is the largest and most well-developed of these known samplers, with strong composition and exemplary needlework throughout. The characteristics that distinguish these samplers include the lustrous lawn of long satin stitches with clover and various flowers imbedded within the grass, the pair of willow trees as well as the pair of pine trees, a central two-handled vase of flowers, a choice of verses including the two that were meticulously inscribed onto this sampler and complex borders of trumpeting lilies and leaves. Names and dates generally appear in a sawtooth edged compartment and delicate vines of buds and berries surround the poems.

These samplers were all made by girls and young women who came from Upper or Lower Providence Townships of Montgomery County and indicate that an instructress of extraordinary talents was working in that area. It is possible that Mary Abel, who was 31 years old and unmarried in 1820, was indeed this teacher.

Family information that accompanied the sampler indicates that Mary married Jesse Conway. This led to the identification of Mary and to much information regarding the family. Born in nearby Chester County , Mary was the daughter of William Abel, who was a soldier in the Revolutionary War. The family ultimately settled in Upper Providence Township and in 1828, Mary married, as his second wife, a widower, Jesse Conway; evidence points to the fact that his first wife may have been Mary’s older sister. Mary and two unmarried sisters, Susan and Wilamina, were strong and independent women indicated by deeds and real estate transactions during their lifetimes as well as the specifics of their wills upon their deaths. Mary, Susan and Wilamina were closely tied to Mary’s step-children throughout their lives. In 1873 Mary Abel Conway died and is buried in a Church of the Brethren Cemetery in Upper Providence Township . Her sampler descended in the family for generations.

Worked in silk on linen, the sampler is in excellent condition. It has been conservation mounted and is in a mahogany frame.