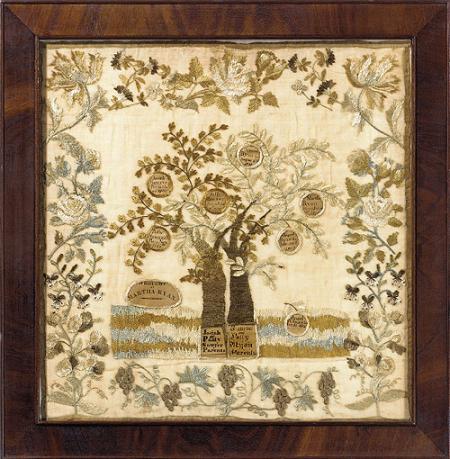 It is a privilege to offer this extraordinary sampler which is both rare and visually arresting. Working within the genre of the Apple Tree Family Record samplers which has been well documented, Martha Ryan created a sampler that is folky yet sophisticated, presenting a pair of trees that represent the two marriages of her mother, Patty Wyman (b. 1771) who married Josiah Sawyer and, following his death, Dr. Samuel Ryan. The family resided in Sharon , New Hampshire , a small town near the Massachusetts border. Outstanding needlework forms the trees, lawn and extravagant borders, and ten carefully lettered pen and ink inscriptions on paper present the family information; this combination of needlework and paper inscription is unique within this important group of samplers.

The two separate but intertwined trees, with distinctly colored leaves, have inscriptions at their bases that designate the two unions. Characteristic of the Apple Tree Family Record samplers, the name and birth date of each child appear inside an apple, with the fallen apple on the lawn at the right resenting a deceased child. Martha, represented by the apple at the far right, was born on June 1 st , 1806 , the second child of the union of Dr. Samuel and Patty Ryan. Dr. Ryan was a surgeon who served twice as town clerk of Sharon and held other civic offices. His father, Dr. Daniel Ryan, had emigrated from Ireland circa 1750 and settled in Massachusetts , subsequently removing to Sharon , New Hampshire in 1790.

Early published genealogies of the area provide extensive information regarding this family, as Martha’s father, and then her brother, were highly successful and prominent mill owners. Sliptown: The History of Sharon, New Hampshire 1738 – 1941 by H. Thorn King, Jr. indicates that the Ryan family mill was in operation as early as 1795. The following description of this family appears on page 130, “Life in Sliptown is quite uniformly homespun but in the Ryan family one catches glimpses of perhaps more of its amenities. Heirlooms of glass, furniture, and fine linens bespeak a comfortable means of livelihood beyond that of the average farmer’s there. It is probable that with the additional means of income which practicing medicine and running a mill afforded went a more gracious way of living.” Interestingly, a sampler made by Martha’s older sister, Abigail Ryan, in 1816, is illustrated in this book (figure 43). While very pleasant, it is much more simple than Martha’s needlework.

Quite remarkably, another record of the same Ryan – Sawyer family is known, a watercolor on paper Apple Tree Family Record that was in the important folk art collection of Edgar and Bernice Chrysler Garbisch (sold at Sotheby’s in November, 1974). This was documented by Peter Benes in his article “Decorated Family Records from Coastal Massachusetts, New Hampshire and Connecticut ” ( Families and Children: The Dublin Seminar for New England Folklife , 1985). It seems likely that it was drawn and painted by one of Martha’s siblings.

In 1828, Martha married John Adams Prescott of nearby Jaffrey , New Hampshire . He was a businessman, justice of the peace, County Commissioner and captain of the Jaffrey Rifle Company. They remained in Jaffrey and had two children; only their daughter, Martha, lived to adulthood.

The sampler was worked in silk, with pen and ink on paper, on fine linen gauze and is in excellent condition. It has been conservation mounted into a mahogany frame.