Gentlefolk in a Pastoral Setting Silk Embroidery, New England, circa 1800 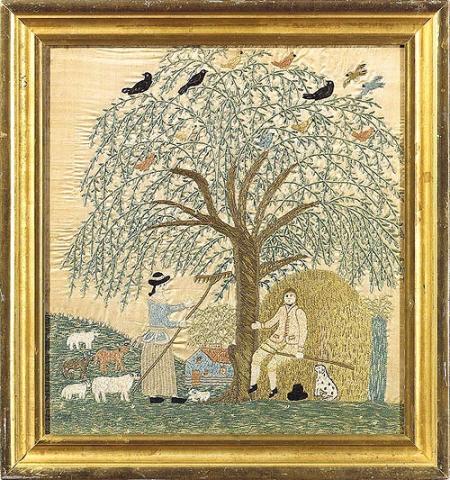 An exhibition at Winterthur Museum, entitled, “Needles and Haystacks: Pastoral Imagery in American Needlework,” explores the same subject through various pieces from their collections and will remain on exhibit through July 23, 2006.   Winterthur curator Linda Eaton writes about this theme which played an important role in American needlework throughout the 18th century:

Pastoral themes held particular meaning for many wealthy American colonists. They saw themselves as escaping from the corruption of Europe and starting fresh in an unspoiled New World… Love and courtship were a mainstay of the pastoral tradition.  Married couples living "happily ever after" was the expected ending for plays, poetry, and novels, and the hope of most young women.

Our captivating silk embroidered picture is anexceptional example of the folk portrayal of this subject. It depicts a young lady with her sheep and cows and a gentleman seated on a haystack, his spotted dog at his feet. The large willow tree, with a dozen variously colored and animated birds provides the unifying image for the scene and the overall effect is unusually fresh and direct.

Much of the needlework was done in a lustrous satin stitch with chain stitch used to outline and provide crisp delineations.  Needleworked details allow for patterns such as the flowers throughout the lawn, the striped skirt and the highlights of the tree trunk. A small red-roofed cottage nestles into the composition, implying depth. It was designed and executed by someone with an excellent artistic instinct and ample skill in the needle arts.

The majority of silk embroideries were accomplished in paint as well as needlework with faces, hands and landscapes painted onto the silk.  The picture owes some of its strong appeal to the fact that it was accomplished entirely in needlework.  Its maker created one of the most noteworthy examples of folk art to come out of the American needlework tradition.

Worked in silk on silk, it is in excellent condition and has been conservation mounted into a 19th century gold leaf frame.