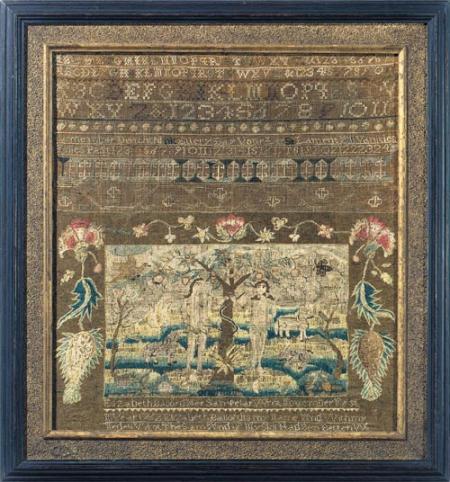 The significance of this outstanding sampler, worked in 1762 by Elizabeth Ballard, a young lady from a prominent Boston family, would be difficult to overstate. It combines the strong Boston sampler tradition, with its classic and recognizable bands and designs, and a fine canvaswork panel of the type equally important to this city’s needleworkers throughout the 18th century.

The tradition of Boston samplermakers including a depiction of Adam and Eve has existed since the 1720s and continued throughout the 18th century. Elizabeth Ballard’s sampler features Adam and Eve in the pastoral setting associated with the Boston Fishing Lady group, with its hillocks, plants, birds, butterflies, etc. The very sophisticated broad border of carnations and long leafy elements appears only on one other known sampler, which is owned by the Museum of Fine Arts, Boston (Mary Fleet, 1743), and these two young ladies must have learned their needlework under the tutelage of the same teacher.

Elizabeth Ballard was the daughter of Capt. Samuel Ballard and Elizabeth Pickering who were married in Boston in 1741. She was their fifth child, born circa 1750. Capt. Ballard was involved in both shipping and sealing and was a maker of mathematical instruments in Boston.   In 1768 Elizabeth Ballard married the Hon. Edward Pope (1739-1818) of Dartmouth and New Bedford, Massachusetts, a judge, colonel in the Revolutionary War, a naval officer of long standing and a leading citizen of the area.

The Ballard family in America began with William Ballard who, along with his wife Mary and two infants, sailed from England to Massachusetts in 1635 as part of the Great Migration, settling in the town of Lynn.  He died in 1639, but during his brief life in the new colony he was involved in the founding of that town. His son Nathaniel was Elizabeth’s great great grandfather.

The sampler is inscribed: “Elizabeth Ballard her sampelar Wrot November First / Ni Year 1762   Elizabeth Ballard is my name and with my / nedel I wrot the sam And if my skll had ben better I wo.” This is a verse that appears with frequency on early Boston samplers ( “…and with my needle I wrote the same and if my skill had been better I would have mended every letter.”). Most interesting to note is an early needle, we assume it was one belonging to Miss Ballard, which remains pinned into the sampler in the lower left corner area of the sampler.

For more information on samplers and canvaswork pictures from Boston, please refer to Betty Ring, Girlhood Embroidery, vol. I, Boston Embroideries in the Eighteenth Century, both the sections on Adam and Eve Samplers and on Fishing Lady Pictures.

The sampler was worked in silk on linen and is in very good condition with weakness and minor loss.  It has been conservation mounted and is in an excellent 18th century black painted frame with a wide sanded liner.