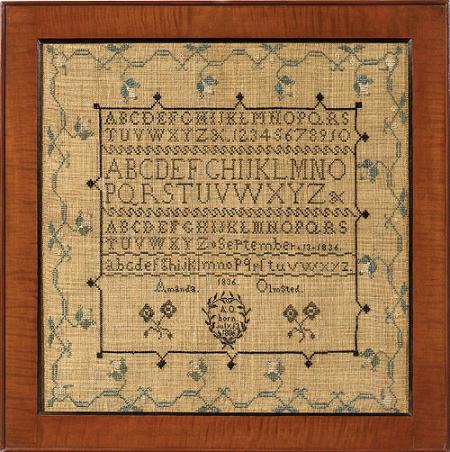 Amongst the approximately 100 utopian and religious communities that existed in America during the 19th century, the Shaker communities are today the best known and most widely respected.  The objects which the Shakers made and lived with served a strictly utilitarian purpose and are revered for their handsome, spare design and precise workmanship.  Only five samplers are known to have been made in the Ohio Shaker communities and we are privileged to offer this fine example by Amanda Olmsted.

Amanda Olmsted was thirty years old in 1836 when she worked this sampler. She had been a Union Village Shaker since the mid 1820’s when her entire family joined Union Village, the largest Shaker community west of the Allegheny Mountains.  As Amanda inscribed inside the wreath on her sampler, she had been born July 13, 1806 and it is believed the family was from Vermont and then, briefly, Canada.

Union Village records indicate that from 1832 to 1837 Amanda’s position within the community was Second Eldress.  As such, she would have served as assistant to the community Eldress, and perhaps, more significantly for the purpose of interpreting the sampler, also functioned as the overseer to the adolescent girls. Amanda’s days would have been devoted to teaching skills such as needlework, weaving, rug making and laundry.  Her handsome sampler would have served as a fine example to her charges and an excellent template from which they would have learned to mark linens and clothing, important jobs within this large and active communal village.

Remaining a member of Union Village for the balance of her life, Amanda died in December, 1883 and it was written in the Shaker Manifesto of January 1884, “She has been a faithful member for 60 yrs. living a pure virgin life and devoted to community interests.  She honored her profession and zealously supported the cause of the Gospel and has now gone on to a happy home in the better Land.”

It is in excellent condition, worked in silk on linen and now conservation mounted into a red-stained maple frame with a black inner beveled edge.