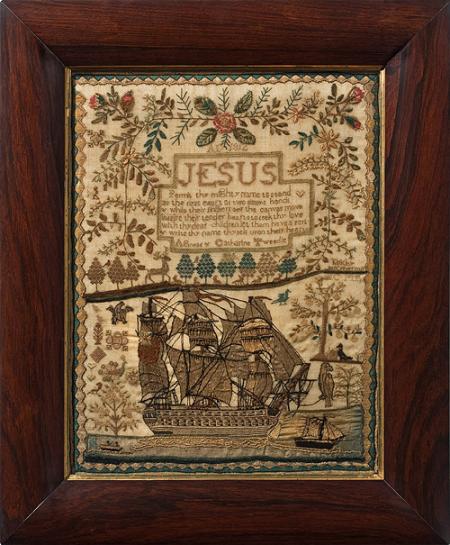 This is an extraordinary and highly significant sampler which features a visually compelling scene of an enormous sailing ship, an unusual subject; equally if not more significant is the fact that the sampler was worked by two sisters, a highly uncommon occurrence.

The three-mast ship is shown in full sail and the source was likely a published print; however, the town of Leith was the main port of Edinburgh and we can speculate that the Tweedie family may have had involvement in the shipping trade. The ship was formed with long satin stitches for the sails and rigging, and extremely fine tent stitches for the hull. Noteworthy is the Union Jack flying from a mast at the stern and enormous figurehead of a lady at the bow, with an even larger parrot, tethered by a line to the bowsprit. The ship is set upon very fine silk gauze, which along with chenille stitches forms the sea, and two small vessels bob nearby.

The date, 1812, was stitched just above the framework that contains the verse and the names of the sisters who, together, worked this sampler. Interestingly, a slight change in the wording of this classic verse refers to the fact that this needlework was made jointly. The name of their teacher, Kirkby MacPherson, appears at the right end of the horizontal line that bisects the sampler. A large deer and many little animals prance amidst the characteristic Scottish trees on this same uphill line. Large leafy branches with flowers and buds embellish much of the upper register and a splendid, solidly stitched border frames the sampler well. From both an aesthetic and a technical standpoint, this sampler is a fine accomplishment.

The instructress named on this sampler, Kirkby MacPherson, was born in 1776 in Ratho, Midlothian, a parish just outside Edinburgh. She was the youngest of three children to Hugh McPherson, a weaver, and Mary Robertson. In 1813, one year after teaching the Tweedie sisters, she married Robert Cowan, a teacher in South Leith. They appeared to have no children. Robert was killed at the Leith docks on June 25, 1832. His death notice lists him as a teacher at North Leith. Kirkby died January 21, 1842.

The specific identities of Agness and Catharine Tweedie remain elusive but their sampler stands as a testament to their education and great talent in the needle arts.

An excellent, recently published book, Remember Now Thy Creator: Scottish Girls’ Samplers, 1700-1872, by Naomi E. A. Tarrant (Society of Antiquaries of Scotland, 2014), retired long-term Curator of Costume and Textiles at the Royal Scottish Museum, later the National Museum of Scotland, is a wonderful addition to our reference library; we highly recommend this book.

Worked in silk and silk gauze on linen, the sampler is in excellent condition with some minor loss to the silk gauze. It has been conservation mounted and in is its fine, original rosewood frame.