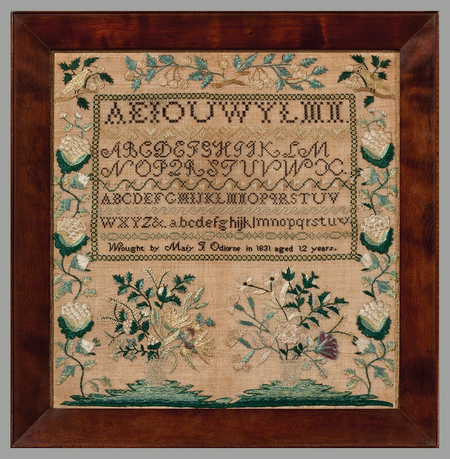 The Odiorne family in America originated with John Odiorne (1627-1707) who was born in England and emigrated to New Hampshire prior to 1657. Genealogy of the Odiorne Family, by James C. Odiorne (Boston, 1875), documents the early history of this family, as well as the many contributions made by ensuing generations. The emigrant ancestor, John Odiorne, received two land grants circa 1660 for sections of land near Great Island, now Newcastle. The second parcel likely included land at the mouth of the Pascataqua River; it came to be known as Odiorne’s Point.

Six generations later Mary Folsom Odiorne was born to Theophilus and Sarah (Gordon) Odiorne. He was a farmer and they resided in Durham, New Hampshire on land near the Old Pascataqua Bridge. Amongst Mary’s ancestors were shipmasters, mariners, farmers and merchants, typical trades from this area which derived its success from both the water and the farmlands.

When Mary was 12 years old, she worked this praiseworthy sampler with outstanding baskets filled with flowers and side borders of fine large blossoms and buds on vines. Two large birds and berries on branches were worked in the upper corners flanking a berry-laden branch with brilliant teal blue serrated leaves. The baskets sit on unusual, jagged hillocks worked in vibrant shades of green which are echoed in the six large flowers of the side borders.

She married John Hill, a farmer, also a resident of Durham. They had one child, Lydia, who was born in 1852 and by 1860 the family lived in Madbury, just north of Durham. Mary died there in 1889. Her sampler remained in the area for many generations.

The sampler was worked in silk on linen and is in excellent condition. It has been conservation mounted into a beveled cherry frame with a maple outer bead.