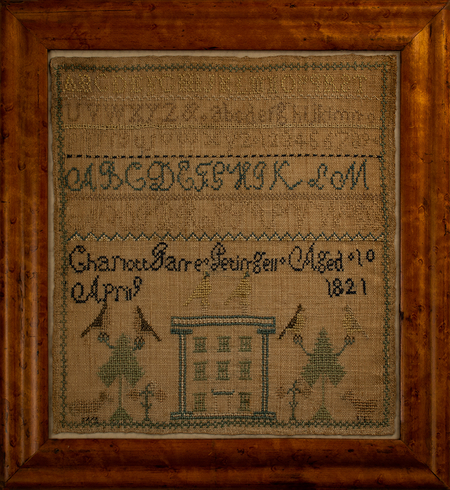 An endearing little sampler, this was made by 10-year-old Charlott Jane Petingell; the family lived in Newburyport as well as just across the river, in Salisbury, Massachusetts. She depicted a fine Federal house, with two large birds on its roof. Other birds are perched on pine trees that flank the house. There was a strong samplermaking tradition in Newburyport and those elements are evident in this sampler.

Charlott was born on April 9, 1811, to Joseph and Charlotte (Pecker) Petingell. The surname was spelled variously, and Charlott didn’t include the final “e” on her given name. She also stitched her “n” backwards, twice. Her father was a ferryman, conducting the ferry between Newburyport and Ring’s Island for many years.

A Pettengill Genealogy by Charles I. Pettengill (Boston, Massachusetts, 1906) chronicles this family, beginning with Richard Pettengill who was born in England, circa 1620-25. He arrived in Massachusetts circa 1641, settling in Salem. Photocopies from this book, from Richard through to Charlott, accompany the sampler.

In 1831, Charlott married Joshua Moody Pike, a cooper, and they lived in Salisbury, where they had at least  children. She died in 1874.

The sampler was worked in silk on linen and is in excellent condition. It has been conservation mounted and is in maple frame. 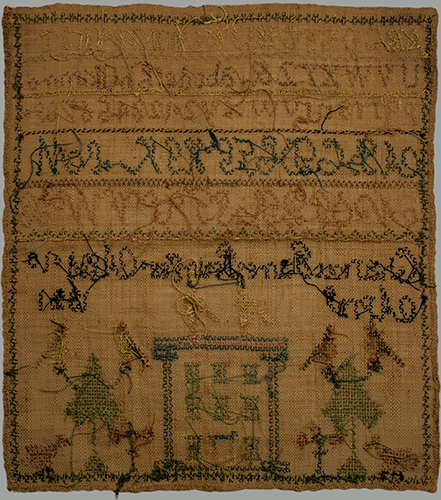